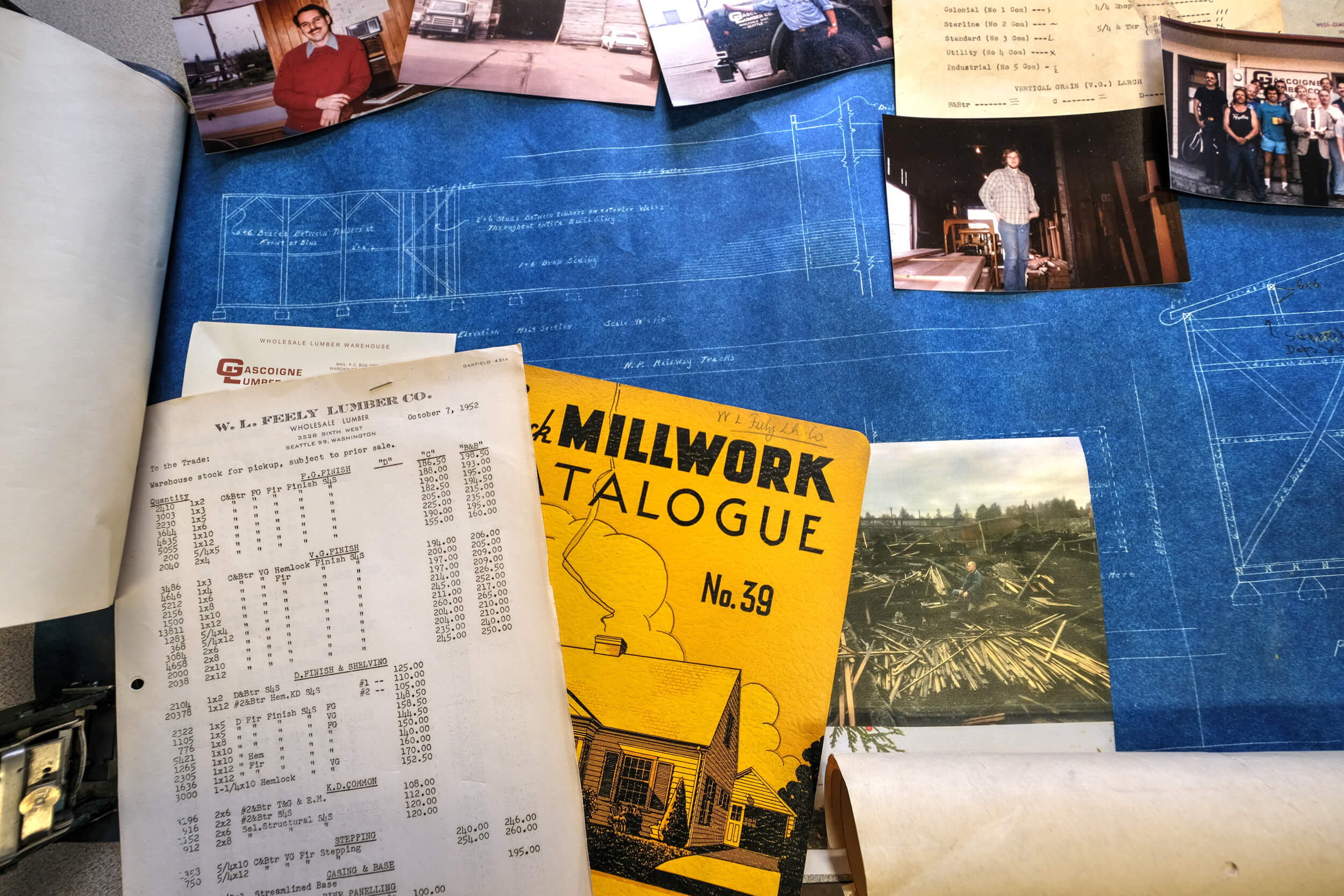 In January 1918, W.L. Feely and George B. Schmidt raised $6,000 to incorporate the Feely Lumber Company. Their main warehouse was beside the ship canal in Seattle’s North Queen Anne neighborhood, built directly over a siding of the Northern Pacific Railway. For the next fifty years those tracks provided the company that would become Gascoigne Lumber with a vital link to mills throughout the region.

The company grew steadily over the next forty years. In 1956 W.L. Feely died, and his interest was bought by the company’s leading salesman, Jim Lawlor. Jim changed the name to the Feely-Lawlor Lumber Company. One day in 1959, Bruce Gascoigne walked into Jim Lawlor’s office. Bruce had been a Phi Delta Theta fraternity brother of Jim’s for one year at the University of Washington in 1941, before Bruce left school to join the Marines. After the war Bruce had gone to work for International Paper in Longview, Washington– but when the company tried to transfer him to Hoboken, New Jersey, he quit and began selling life insurance to support his young family. Bruce went into Jim’s office to sell him a policy, and walked out with a job and the promise of a minority ownership stake in Feely-Lawlor Lumber Co. 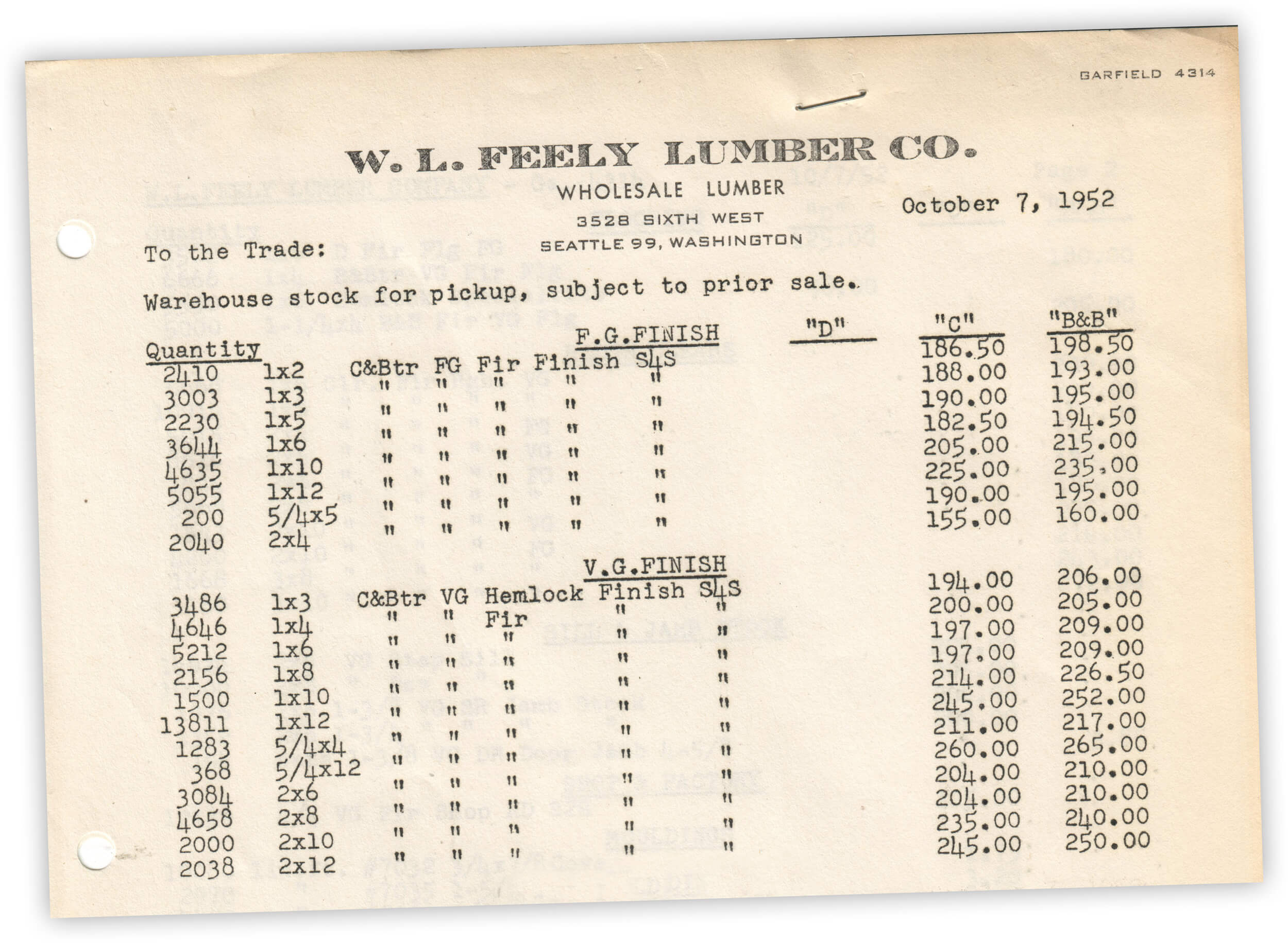 In 1969, Jim Lawlor died unexpectedly of a heart attack. Bruce Gascoigne arranged to buy up Lawlor’s interest in the company, and when that was completed he changed the name to what it remains today: Gascoigne Lumber Company. 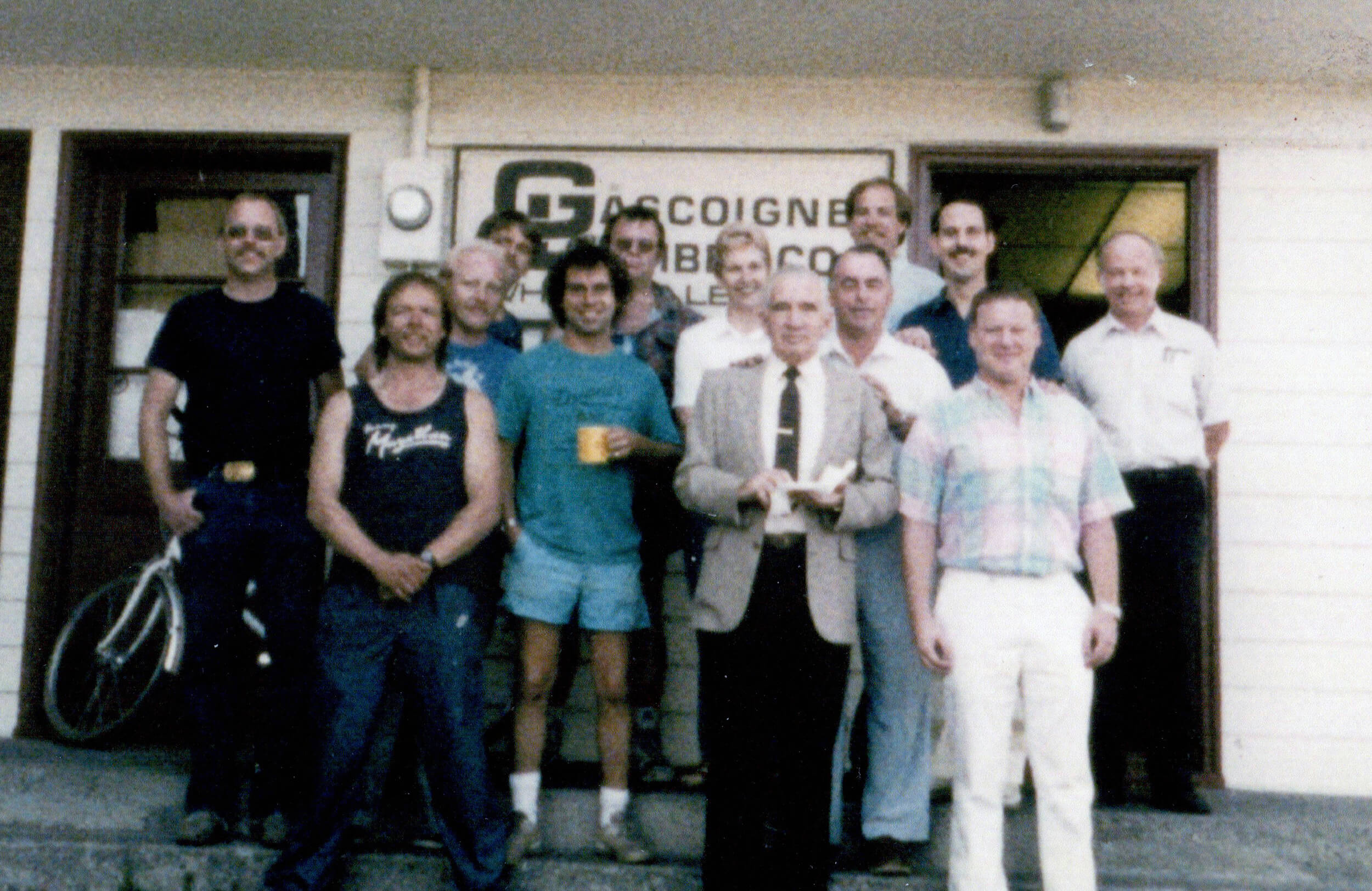 In 1976, with trucks taking over most delivery duties, the final railroad car filled with finish lumber rolled into the Gascoigne Lumber Company yard. Bruce’s son Buzz Gascoigne helped to lever the boxcar slowly– by hand– down the length of the warehouse until it was opposite the appropriate bin, then he climbed on his belly into the narrow, dusty gap between the load and the roof of the boxcar and began to carefully slide the lumber out. Some people get nostalgic about the golden days of the railroads, but Buzz isn’t one of them– “It’s a helluva lot easier forking it off a flatbed,” he says.

Bruce retired in 1986 and passed the company to his sons Rob and Buzz Gascoigne in 1990, who in 2015 sold it to their longtime salesman Tom Davis, who had started his career with Gascoigne Lumber as a yard hand back in 1978. Tom would lead the company through its 100th year in its original location… but that location wouldn’t quite make it to year 101. 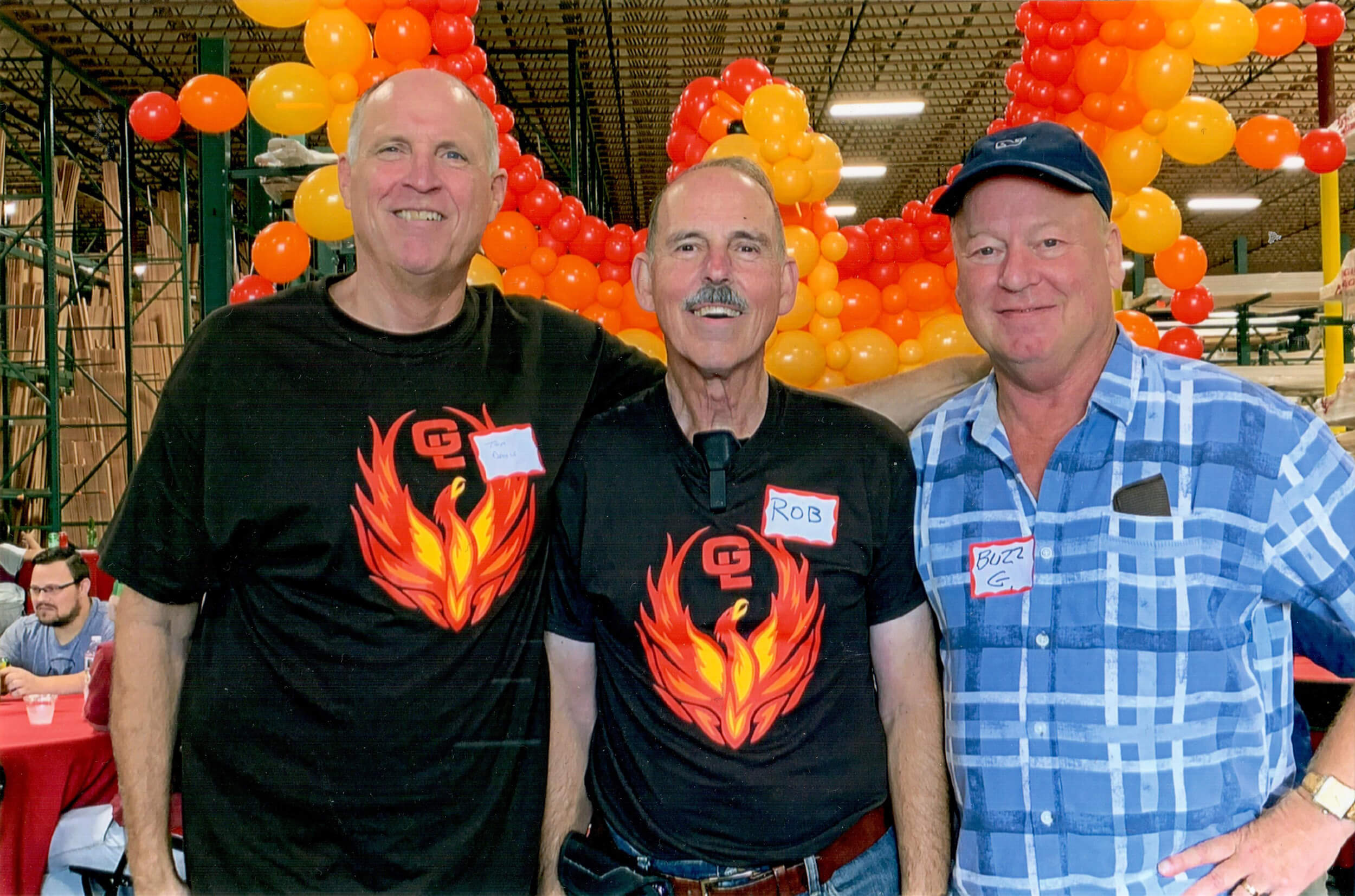 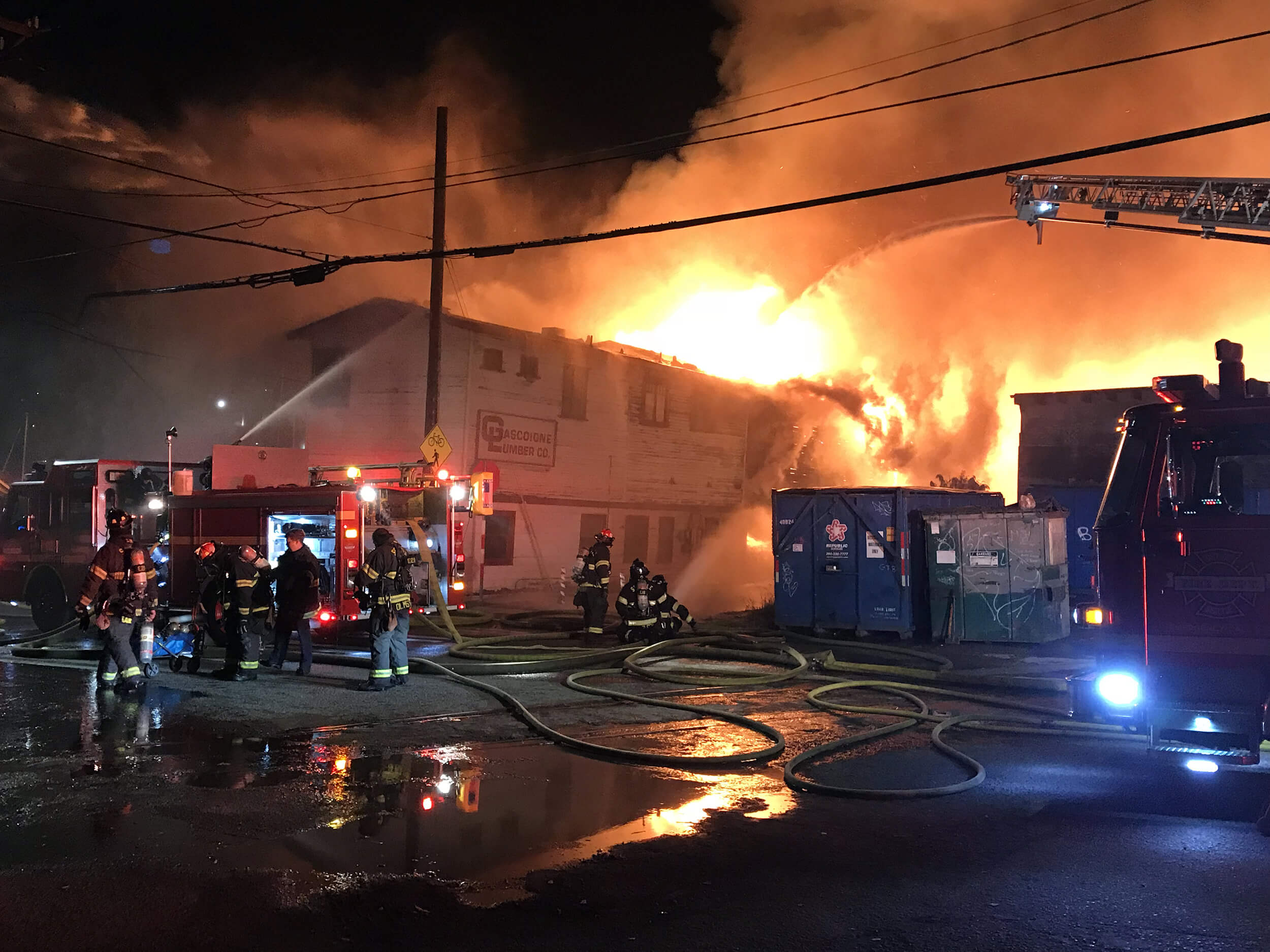 On the night of November 10th, 2018, Gascoigne Lumber was the victim of the largest fire Seattle had seen in twenty years. Started on an adjacent property by an arsonist, it quickly spread to our sheds and grew into a four-alarm blaze, with flames shooting one hundred feet in the air and a column of smoke visible for miles. Suburban fire companies stepped in to cover calls within the city while over 150 Seattle firefighters battled the blaze. Two fireboats anchored in the ship canal to help pump water onto the fire. We lost our two main warehouses and our unit storage sheds, and though our office was also a total loss the efforts of the firefighters allowed us to save our main computer server and many important files. We shipped our first post-fire load of lumber the following Friday, and within a month we were getting set up in our current, modern warehouse in Everett. The next year was a lot of work, but in the end we came out of the experience in a much better facility, and with room to grow.

In August of 2019 we were able to add the inventory and sales book of another long-time family-owned distributor in the area, D.W. Briggs Lumber Co., when that family decided to get out of the business. This gave us the opportunity to expand our jamb and door parts line, as well as increase our footprint in the South Sound area.

Today, Gascoigne Lumber is proud to continue our long tradition of providing the highest-quality products with the best old-fashioned service. Our customers and vendors are our friends, and we treat them as such. Here’s to the next hundred years.